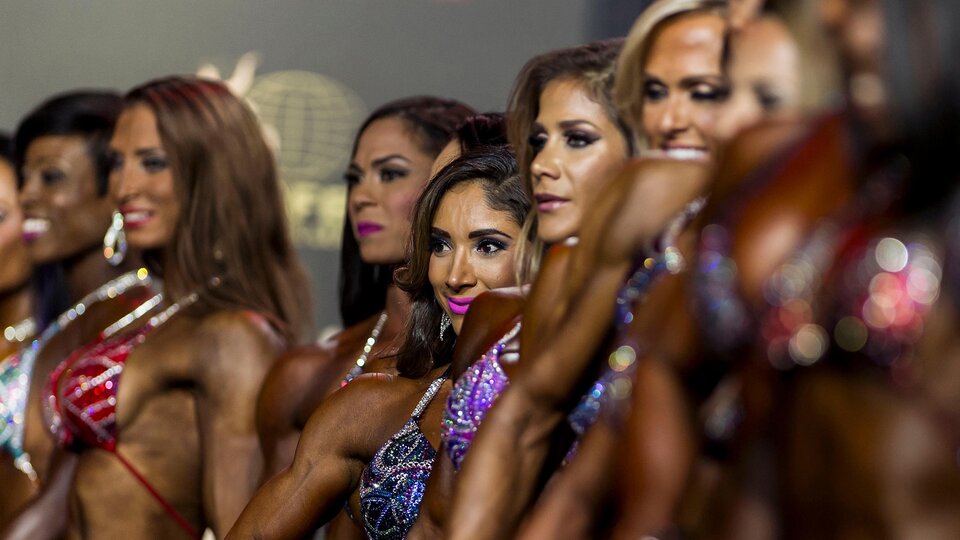 There will be no shortage of female physique athletes at the 2021 Joe Weider’s Olympia Fitness and Performance Weekend, scheduled for October 7-10 in Orlando, Florida. With six women’s events on the bill, competitors of all sizes and shapes will pose down at the IFBB Pro League’s ultimate championships.

A top-five finish earns a money prize in all divisions and an automatic qualification for the 2022 Olympia in all but bikini. To help you keep the bodies straight, here’s a rundown of the players from the oldest division to the newest.

In 2020, promoter Jake Woods and his Wings of Strength organization brought back women’s bodybuilding to the Olympia after a five-year absence, and with it ushered in the era of Andrea Shaw. A total-package bodybuilder in the tradition of Cory Everson, albeit with a lot more muscle, Shaw is the female flexer the judges had been waiting for. A former women’s physique competitor, Shaw won the 2020 Rising Phoenix World Championship and ascended to the Olympia throne, and I don’t see her leaving it anytime soon. Especially since she has two wins in a row at the 2021 Rising Phoenix a month before the Olympia.

Martin, second place last year, is a veteran flexer with tons of muscle and an enviable X-frame. She should repeat in second. Trevino, who was third in 2020, just won the Rising Phoenix again, and she brings a lot of conditioned muscle to the stage. If Shaw slips even a little, this pair will be ready to knock off her crown.

Ash and her beautiful lines moved up from women’s physique last year and took fourth at the Olympia, but she missed her peak at the recent Rising Phoenix. She can possibly bounce back at the O for a top-five spot.

Though she was fifth last year, the highly muscular Anderson’s placings have been erratic lately. Still, the 53-year-old veteran could score in this lineup.

These are my dark horse candidates to penetrate the winner’s circle. Poursaleh won the Tampa Pro with a classic look, while Boswell displayed new size and conditioning in winning the Lenda Murray Savannah Pro.

The results of the Fitness International (at the Arnold Classic) on September 25 greatly influenced this prediction. Truscott is the 2020 Olympia champ, and her solid repeat victory at the International makes her a safe bet to earn her second Olympia title. Truscott’s beautiful X-frame is more developed and conditioned than most of the fitness lineup, and her explosive routine at the International took first, as well. As one commentator put it, “Who’s going to beat her?”

Khadar came within a point of beating Truscott in the physique round at the International and finished third overall. With a strong performance in the routines, she should at least duplicate her fourth-place 2020 Olympia honors, if not better.

Baker has been creeping up in the standings over the past couple of years, and her fourth-place landing at the International suggests she will make the top five again at the Olympia. Ditto for Tyrgale, who was seventh at the 2020 Olympia and moved up to fifth at the recent International.

Jones, a two-time Olympia champ and former Fitness International winner, tested positive for COVID-19 and did not compete at the International. It is unknown whether she will make it onstage at the Olympia. If she does, look for a top-three finish.

Gillon is the four-time reigning Figure Olympia champ, and the pressure is mounting for her to continue her dominance of the sport. The question is, is there anyone currently in the ranks who can beat her? Not likely. Gillon’s dramatic hourglass shape and perfect conditioning should prevail once again.

Soltero scored a big win at the 2020 Physique International and beat out Wyatt by two points to take the runner-up spot at the O. Either one will be waiting to see if Gillon falters.

Graham conditioned her way to fourth ahead of two-time Figure O champ Latorya Watts in 2020, and she’s in good shape for a similar finish here. Padilla dropped from fourth in 2019 to sixth last time, but her two big wins this season should propel her attractive curves back into the winner’s circle.

With Latorya Watts not competing this year, there’s opportunity for someone else to break through. Starling-Howell, fifth two years ago, is a likely candidate.

With 2020 champ Janet Layug and two other top-five finishers not competing this year, the Bikini Olympia title is wide open. A whopping 39 women qualified, but in my opinion, it will come down to these two.

Dorie, who is last year’s Olympia runner-up, beat Pecini, the 2019 winner, by a single point at the Bikini International on September 25, and I’m not sure why. Dorie may have been a little tighter (in a bikini way), particularly in her upper body, however, Pecini still has two weeks to improve her form. Though she dropped to sixth at the 2020 O, Pecini gets my vote.

Chapados had the best rear pose at the Bikini International, but the judges put her in third. She has finished as high as second at the Olympia, but her overall structure may keep her out of the running for the top spot this time.

What to say about three-time Olympia champ Kaltwasser, the winningest bikini pro, including seven wins this season? No matter how many victories she notches, Kaltwasser has gotten no love from the Olympia judges since 2015. She was seventh in 2020, but this year, after taking fourth at the International, she should finish in the money.

Basualdo was a hot prospect a couple of years ago, but her scores since then have fizzled. A big win at the 2021 New York Pro and fifth place at the International have put her back in the running.

I like the looks of Gonzalez and Blanquisco, both of whom have finished ninth at the O in the past and came back with solid wins this season. Stern is a two-time Figure Olympia champ and gets a shout-out for streamlining down to bikini and making it back to the big show.

Last year, I was so dazzled by the larger-than-life X-frame of two-time Olympia champ Shanique Grant, I failed to notice the way the judges were favoring Sarah Villegas in the callouts. Villegas is a total-package player, with solid muscle plus symmetry and proportion to burn, and she had sufficient conditioning to knock out the champ and ascend to the Women’s Physique throne. Nothing exaggerated, nothing out of place in Villegas’ presentation. With Grant retired, she has only to get past Natalia Abraham Coelho to score a repeat victory.

Coelho, a Rising Phoenix and Women’s Physique International winner, has added size and enhanced her V-taper every year. She was the most conditioned athlete in the Olympia lineup in 2020, finishing third, and is always a threat for the title. Still, Villegas slipped ahead of Coelho in 2019 and has stayed there. The judges love Villegas’ look, and she should prevail in Orlando.

Menage and Rhein, last season’s Olympia fourth- and fifth-placers are perfectly positioned to land in the top five. Menage carries an enviable layer of tight muscle all over her symmetrical frame.

Tiangngok won the 2019 Arizona Pro and is dangerous in any show she enters. She has added some size since her eighth-place finish at the 2019 Olympia, and I can see her sliding into a top-five spot.

Chartrand won the Puerto Rico Pro in June, much improved from her out-of-the-running finish at the 2020 Olympia. If any of the above women slip, she’ll be ready.

The IFBB’s newest women’s division is still finding its footing and has not yet been contested at the most prestigious shows, the Olympia and the International. To boot, not many of the qualified athletes competed multiple times in 2021, making it difficult to determine consistency.

The rulebook says, “This division is for females with athletic physiques that showcase more body mass in the hips, glutes, and thigh areas. The upper body is developed but not to the same degree as the lower body.” After studying a ton of hips, glutes, and thighs that have stepped onstage over the past two years, I’m making an educated guess. Double points if I get it right.

A former bikini pro, Ayala was built for wellness, or, rather, wellness was built for her. With her legs and glutes round and full, she took second to Borges at the Pittsburgh Pro, and two weeks later, tightened up to beat Borges at the New York Pro, two contests that bring out the Olympia judges. Either could win at the O, but I like Ayala’s curves better.

The 2020 Tampa Pro winner, Harshey took the Arizona Pro at season’s end and has momentum going into the Olympia. Jewett won at the 2021 Tampa Pro with fine overall conditioning and looks to get some notice at the O. Andrews is a rookie who did well in Pittsburgh and New York and could get some attention if she competes in her best shape.

The rest of the lineup. Twenty-four women qualified for the first Wellness Olympia. With so many beautiful bodies for the judges to choose from, anything is possible.

At press time Jen Pasky Jaquin was the only female listed to compete. The 39-year-old won the 2019 and 2020 Arnold and the Olympia, respectively, as well as the 2018 NPC Women’s Championships.

See the complete weekend schedule at MrOlympia.com, including information on the live telecast.